Bangalee Reserve has close to 2.3km of frontage along the Shoalhaven River. Located around 8km upstream of the Nowra Bridge, the water is tidal and quite brackish. During dry periods, the salinity rises substantially while in wetter periods, the water becomes much fresher.

Bangalee Reserve's River frontage is actually split into three distinct sections. At the far western (upriver) end, a wide beach runs for about 500m towards the picnic area, finishing about 100m west of where the picnic area starts. From this point until about 50m east of the jetty, the riverbank is quite rocky and has many established trees along it. This 300m rocky stretch is the favourite spot of several fish species including Bream and Luderick. The final stretch from where the rocks finish to the far eastern (downriver) end of the reserve is another beach. This beach is not as wide as the western beach, rarely being wider than 3m even at low tide.

​Normally, the River is fairly shallow at Bangalee Reserve. At low tide, sand islands can appear several metres out from the River's edge and fallen trees become exposed. This is particularly the case in the western (upstream) end of the Reserve. In floods however, the River can rise quite high. In the August 2015 flood, pictured here, the River was high enough to almost completely cover the stairs leading down to the jetty! 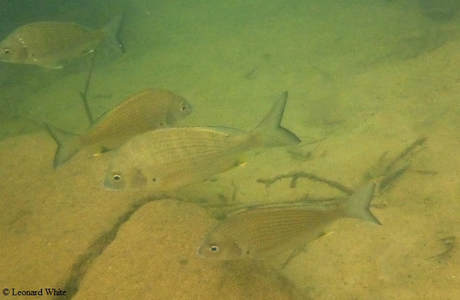 Yellow-Finned Bream at Bangalee
Yellow-Finned Bream (Acanthopagrus australis)
Bream are the most common fish in the River at Bangalee. On clear, sunny days they can be easily spotted swimming along the edge of the riverbank or under the jetty. The particularly like the rocky shoreline in front of the picnic ground.

Bream are present at Bangalee all year round with peak numbers usually occurring in spring and summer. We assume that they use the River for breeding as they are usually either tiny in size (presumably young fish) or really large (presumably mature fish).

Juvenile Luderick at Bangalee
Luderick (Girella tricuspidata)
Luderick are another really common species in the River at Bangalee. While they are not quite as common as Bream, they do reach an impressive size; often upwards of 35cm long. They don't come quite as close to the riverbank as Bream, preferring to stay on the underwater slope about five metres from the shore. 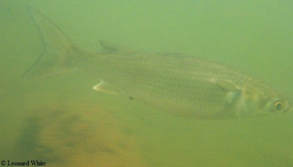 Sea Mullet at Bangalee
Sea Mullet (Mugil cephalus)
Sea Mullet are also fairly common at Bangalee. Unlike Bream and Luderick, Sea Mullet prefer to stay really close to the surface. This makes them very easy to spot, especially when the sun reflects off their silvery scales. They can be seen on most days swimming in small schools along the River's edge or under the jetty.

Estuarine Perch at Bangalee
Estuarine Perch (Macquaria colonorum)
Estuarine Perch are far less common at Bangalee than the ocean-going species. They also do not seem to be particularly large. 15cm is about the largest we've seen. They are very timid fish and will neither venture near the surface nor the riverbank. If there's any large rocks in the water, they tend to use them for shelter. The only real way to see them is to get in with goggles as they are also impossible to spot from above. 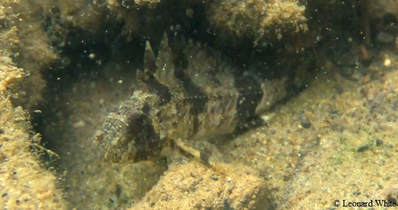 Juvenile Bullrout at Bangalee
Bullrout (Notesthes robusta)
The Bullrout, also known as the freshwater stonefish, is very common at Bangalee. As with other stonefish, it has numerous venomous spines along its dorsal fin. A sting from one of these spines is extremely painful and can have other nasty side-effects. Most of the Bullrouts seen near the jetty and riverbank are relatively small juveniles. We assume that the larger adults stay in deeper water. Even so, it is best to beware.

Bullrouts sit on the bottom of the river in both sandy and rocky areas. They are not very timid fish and will not move unless you come within a few centimetres of them. Their colour varies from a mottled brown to a black-and-white striped pattern. The black-and-white striped ones, like the one in this picture, actually bear a striking resemblance to a marine fish called a Fortescue. They are, however, distinct species. 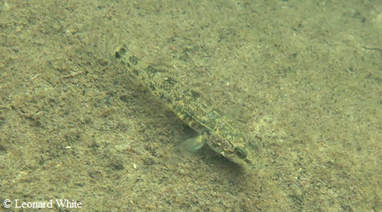 Cox's Gudgeon at Bangalee
Cox's Gudgeon (Gobiomorphus coxii)
There are actually several species of gudgeon and other small fish at Bangalee. Cox's Gudgeon is just the most common. As with other gudgeons, Cox's Gudgeon doesn't grow much larger than 5cm long. At Bangalee, gudgeons prefer the rocky areas and can often be seen clinging to large boulders within a metre or two of the surface. They do also sometimes venture into the reeds and sandy areas. They are very timid fish and will dart away as soon as they feel slightly threatened. 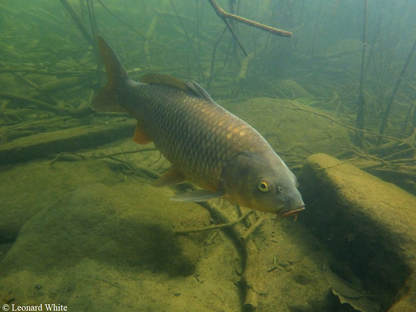 European Carp at Bangalee
European Carp (Cyprinus carpio) (Pest)
Carp are not particularly common in the River at Bangalee but they are in sufficient numbers and size to be of some concern. The one in this photo was well over 60cm long.

Carp don't seem to cause too much damage in the rocky areas but do have distinct impact in the sandy areas and among the reeds. Their constant sifting through the mud creates great clouds of dirty water which affect smaller, native fish. It also results in any new waterplants being sucked out of the mud before they have a chance to get established.

Estuary Stingray at Bangalee seen from above water
Estuary Stingray (Dasyatis fluviorum)
The Estuary Stingray is frequent visitor to Bangalee. At low tide, you can see stingray holes in the sand on both the eastern and western beaches. From above the water, you can usually spot them swimming along the sandy flats. If swimming, they often will often go right under you.

Adult Estuary Stingrays reach up to 2m from head to tail. Like other stingrays, they have a poisonous spine on their tail which they use for defense. The ones at Bangalee do not seem to be particularly territorial unlike some of the ocean species. That said, they still can be dangerous if feeling threatened or if they get startled.
​

Red Claw Crabs on the rocks behind the jetty
Red Claw Crab (Perisesarma bidens)
Red Claw Crabs are distinguished, quite unsurprisingly, by their red or orange claws. They are a small species that is full grown once they are about 6cm across.

​At Bangalee, they can be seen throughout the year along the rocks behind the jetty and in front of the picnic area. They are extremely timid and will disappear into the sand or rocks at the slightest sign of movement.

Much of the riverbank at Bangalee has become severely degraded over time. Along the two beach sections particularly, erosion continues to be a big issue. Erosion is the result of a few factors. First, the early farming activities resulted in much of the riverbank losing its stabilising trees. While some natives returned naturally once grazing ceased, lantana growth has prevented thick regrowth of native plants. 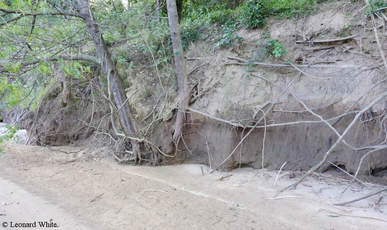 Erosion caused by wake-boarding boats
Second, wake-boarding boats cause large waves that undermine the soft clay cliff along the River's edge. As the near-vertical cliff edge gets undermined, it collapses and the tide carries the soil away. Because of the tide action, the soil never gets to settle and therefore never reduces the steep slope of the riverbank. The result is that the cliff remains vertical and is undermined over and over again. Any trees that are near the edge simply collapse into the River further destabilising the bank.
​The discovery of the impact of waves action from wake-boarding boats was actually made by Shoalhaven Riverwatch. Over several years, they have pioneered a solution to prevent the continual undercutting. It is called the Shoalhaven Sand Sausage and is a continuous sandbag that sits on the beach below the cliff. By putting several layers of Sand Sausage on top of each other, Shoalhaven Riverwatch have been able to prevent waves from wake-boarding boats from reaching the bottom of the cliff and have also prevented the tide from washing away the fallen soil. Coupled with the planting of stabilising native plants, the riverbank can now be completely restored. 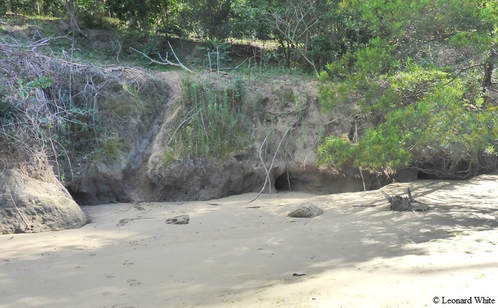 Wombat tunnels in the riverbank on the western beach
Third, wombats also play a big role in destabilising the bank. Without the deep root systems of native trees, wombat tunnelling causes large sections of cliff to collapse into the River.

Wombats are probably less of an issue than waves but still are a cause for concern. Perhaps the biggest problem with wombats is that they eat any trees planted on the bank to stabilise it. Once the Sand Sausage is in place though, the wombats can actually be useful. Their mining operations fill up the area between the Sausage and the cliff and thereby increase the speed at which the slope naturally shallows out.