​At Bangalee, we use Lilly Pillys extensively for regeneration. They are hardy and ideally suited to areas formerly infested with lantana. Because their seeds sprout wherever they fall, we can simply transplant or pot up the seedlings without going through the first step of germinating the seeds. This makes them even more attractive! 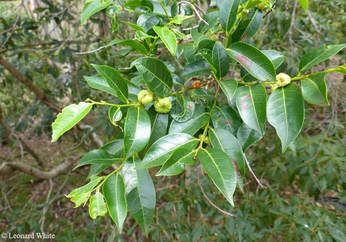 Cheese Trees leaves and unripe fruit
​The Cheese Tree is a fast-growing, early coloniser. Despite primarily being a rainforest tree, it is very drought tolerant and will grow with very little attention.

​Adult Cheese Trees grow to around 12m x 12m and produce a fairly thick canopy. Their leaves look remarkably like the leaves of a lilly pilly but can be distinguished by their lighter green colour and their alternate placement along the frond. New leaves are also light green rather than pink or purple as with lilly pillys. 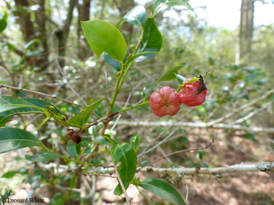 Ripe Cheese Tree fruit
​Cheese Trees flower in spring producing hundreds of tiny yellow flowers directly on the stem. Over summer, these change into round, segmented berries about 1cm across. As the berries ripen, they go from light green to red or pink. An established Cheese Tree will literally produce thousands of them.

At Bangalee, we use Cheese Trees to establish a canopy quickly. The faster the ground is shaded, the quicker we can stop weed regrowth! 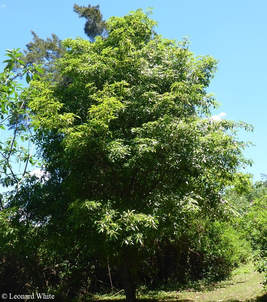 Full-grown Pittosporum
​Pittosporums are an extremely versatile colonisation tree. They are fast growing and highly drought tolerant. Their root system is fairly vigorous and surface roots will often spread well beyond the area covered by the canopy. This makes them perfectly suited to areas where erosion is likely to be a problem.

​However, because they lack significant tap roots, they should be planted alongside deeper rooted trees to maintain long term stability. Their only drawbacks are that they spread very easily and they are not fire resistant.

Pittosporums can be identified by the waves or undulations along the edge of their oblong leaves. They are a dense tree and can reach up to 8 metres in height. 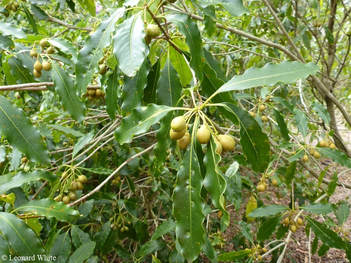 Pittosporum leaves and seed pods
​In mid spring to early summer, Pittosporums produce thousands of tiny white flowers at the end of each stem. These flowers emit an extremely strong scent of honey. By late summer, the small football-shaped seed pods appear. While they start off green, the seeds are not mature until the pod has turned a bright orange colour.

We primarily use Pittosporums in areas that we want revegetated really quickly. For instance, in a spot where there are problems with erosion or weed regrowth, we plant pittosporums to provide a quick cover.

​Although it is technically a rainforest plant, we have found that Blueberry Ashes are actually quite drought tolerant once established and will survive in a variety of soils and conditions.

The Sandpaper Fig is excellent for erosion control. It has an extensive root system and will tolerate brackish water better than many other native trees at Bangalee. It can be found throughout the river flats growing right down to the water’s edge.
​
Germination: Cutting.

The Shoalhaven River marks the southern-most limit Moreton Bay Fig’s native range. Even so, there are plenty to be found in the rainforests across the region. Moreton Bay Figs are the most easily recognisable of all the figs. Their extremely large buttresses stand out in any native bushland while their height allows them to be seen from quite a distance. Adult Moreton Bay Figs usually exceed 50 metres in height and are often over 60 metres wide.

The leaves resemble Port Jackson Fig leaves in that they are oval shaped, have a green topside and brownish underside. However, Moreton Bay Fig leaves are longer at between 15 and 25cm, have a darker green topside, and have a much more rust-coloured underside. Some leaves may also lack the rust-coloured underside altogether, being light green instead. All leaves are arranged alternately along the stem.

The fruits typically appear in late summer. They are round, roughly grape-sized and change from light green to burgundy red as they ripen.
​
Germination: Seed.