​All new plantings need to be maintained for about two to three years until they are sufficiently large to be independent. The extent of maintenance required during that time largely depends on the weather, the plant’s location, soil quality and amount of weed regrowth. 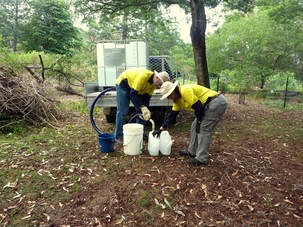 Bucketing water from an IBC tank
​New plants must be watered fairly often until they begin to get established. Depending on the weather, this can be as often as every two weeks for the first six months after being planted. The easiest way to check if plants need watering is to just scrape away some of the top soil near the plant. If it is slightly damp and clumps a little, it is probably ok. If it is dusty and looks dry, it’s time to do some watering. Do not wait until the plants start to look wilted or stressed.

In particularly hot or dry conditions, we water all our plantings even if they have been in the ground for several years and look reasonably established. It would be very disappointing to watch a tree grow for several years only to have it die from lack of water! It would also leave a hole in amongst the other plantings which could take several more years to fill.

When we do water, we normally put at least two litres on each plant. Assuming a plants initial root area is about 25cm x 25cm, two litres equates to an equivalent of 32mm of rain. (1mm of rain = 1 litre per 1m2). To put that in perspective, average rainfall through the summer months is over 100mm per month so 32mm every two weeks is still substantially less.

​Tree cages must be weeded regularly both inside and outside. Weeds left to grow to near the young plants can smother them, take excess moisture and make them hard to spot when spraying weeds.

It is easiest and most effective to pull out weeds by grabbing the stem just above the ground. This ensures that all the roots come out with the rest of the weed and that the stem doesn’t just break off. When weeding inside a cage, identify the tree stem and simply pull out all the others stems under the wire or mesh.

​A new planting area will require spraying fairly often to prevent annual weeds taking over. However, Roundup should be used with some caution. Current scientific research is showing that too much Roundup in too short a time can leave a residue in the soil which slows down the natural growth of the desired plants. Because plants don’t normally absorb Roundup via their roots, the reason growth slows in poisoned soil is not yet known. All that is known is that it has a significant impact.

We follow a few research-based rules in relation to Roundup use to minimise contamination risks. So far they seem to be working.