Lantana is the main weed at Bangalee. It grows from the River's edge right up onto the escarpment behind Koloona Drive. It is thickest along the river flats but can also get fairly dense further up the ridges despite the established native canopy.

Lantana is very good at surviving attempts to get rid of it. Roots left in the soil will quickly regrow and green stems touching the surface will set root and become new plants. Even once an area is cleared, lantana seeds remain. If debris or other weeds prevent easy access to the site, those seeds will germinate and start reinfesting the site all over again.

At Bangalee, trial and error has taught us that the most efficient way to manually clear lantana is to follow a three step process. These steps minimise the amount of work involved and greatly reduce the time spent controlling regrowth.

Roundup (glycophosphate or glyphosate) is an excellent product. Without it, rehabilitation of a weed infested site would be nearly impossible. Not only does it make large weeds such as lantana easier to remove, but it is also extremely good at controlling the numerous weeds that come up once the lantana is gone.

The first step of the process is to spray Roundup all over the lantana to be cleared.

There are two ways of doing this:
A backpack sprayer is normally used in fairly small areas where the lantana is sparser and can be easily accessed. It is also the primary method of spraying in areas where there are native plants that we want to save. Unlike a splatter gun, a backpack sprayer gives much greater control over where the Roundup goes. When a shroud is placed on the spray nozzle, a backpack sprayer can effectively put Roundup on weeds that are close to small native plants and newly planted trees without risking it drifting onto their leaves.

The recommended concentration of Roundup for lantana is 100ml per 10 litres of water.

In areas where the lantana is too dense to easily access and contains very few native seedlings, the splatter gun is our best friend.

A splatter gun works by using pressurised gas to propel highly concentrated Roundup over a large area. This means that it can reach far deeper into a lantana thicket than would be possible with a backpack sprayer. Depending on the pressure used, a splatter gun has a range of up to 10 metres.

Because a splatter gun kills everything in range, we generally only use it when there are very few native plants growing under the lantana. Experience has taught us that native seedlings grow really fast once exposed. If sprayed as part of the lantana control, they have to be replaced by new plantings. This takes time and incurs unnecessary costs. Accordingly, the splatter gun is generally only used on the river flats where the lantana is extremely dense and few native plants are present.

About three months after the lantana has been sprayed, it is ready to be pulled out.

Although the lantana will appear completely defoliated around one month after being sprayed, the stems will still be green and the roots will still be well anchored. Roundup does not reach its full effect until two to three months after being applied. By this time, all the stems that were going to dry out will have done so and the root system will be significantly weaker.

Now it is time to move on to Step 2, lantana removal. It is very important not to take too long getting to Step 2. After a few more months, some of the lantana will start to regrow and, if left unchecked, will steadily re-infest the site. This is because Roundup does not always kill the entire plant and does not prevent lantana seeds from germinating.
​

​Lantana removal is definitely the most time consuming and labour intensive step of the three step process but is also one of the most satisfying.

There are a few tricks to minimising the amount of work required to convert a lantana infested site into a weed-free regeneration area. 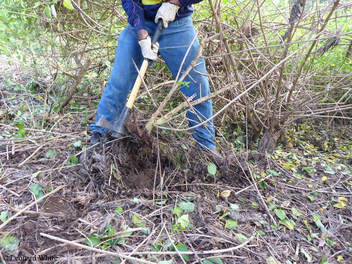 Digging out a lantana stump with a mattock
​1. Aim for the stumps

The easiest way to clear lantana is to get at its stumps. If you can reach the base of the plant, you can cut off the stems and pull them out of the thicket one-by-one. After the stems have been removed and the stump fully exposed, it can be dug out with a mattock. If the stump is too big to dig out and is still green, paint undiluted Roundup onto the cut surfaces.

In many cases though, the lantana plant will be loose enough to simply pull out without needing to be cut or dug up. This is one of the great advantages of using Roundup; it makes the stumps much easier to pull.
​2. Avoid mashing up lantana stems into little bits until they have been removed

It is much quicker to pull long lantana stems out of a thicket one-by-one than it is to hack them up into little bits before trying to remove them. We generally favour large loppers and small handsaws for this purpose. They give much greater control over where the stems are cut than do other tools such as machetes.
​3. Sometimes hacking is the only way to get to a stump quickly

This is a very important point to remember. When a thicket is just too dense to effectively get at with loppers and saws, it is time to bring in the hackers. We use brush axes for this purpose. They are lightweight and have a curved steel blade at the end of a fibreglass handle.

We call this part of the process ‘hacktivism’. The goal is to get to the stumps and cut the stems into manageable sizes. We still want to avoid mashing the lantana into little pieces if possible.

A lantana root that was exposed by scraping the leaf litter with boots
4. Pull out all the roots

There are always some lantana roots left in the ground after pulling out or digging up a stump. These must be removed or they will reshoot. Usually they can be pulled by hand but will sometimes require a mattock.

To check that all the roots have been pulled, we generally run through the leaf litter with our boots in order to expose any stragglers.
5. Pile up the lantana while keeping roots off the ground

It is often tempting to just drop lantana where it is pulled or trample dead lantana without going to the effort of pulling it out and piling it up. While this is easier, we have found that it is not as effective for a couple of reasons.

First, having stems lying all over the ground makes it harder to walk on, harder to control other weeds and harder to gain access to plant new trees. Second, it is too easy to miss roots and small stumps.

The solution is to make piles of lantana. These decay fairly quickly and also make it much easier to manage any regrowth. The only thing to remember here is to keep the roots off the ground. If any roots are touching the soil, they will probably regrow.
​6. There will be collateral damage

You cannot make an omelette without breaking eggs. So it might be said that you cannot rehabilitate a site without damaging some native plants in the process.

Collateral damage is just a normal part of lantana control whether it be accidently spraying natives with Roundup as part of Step 1 or accidently chopping off or trampling a native plant while removing the lantana. The message here is not to obsess over saving every single native plant as part of the broader goal of rehabilitating a site.

At the same time however, we do try to avoid collateral damage if possible. We just make sure that this does not slow down our progress towards the main goal of making a site weed-free.
7. Be safe

This is by far the most important point of all. There are numerous risks involved in lantana removal. Being flicked in the face by a lantana stem, getting in the way of someone else while they are using brush axes, mattocks or loppers, falling down wombat holes or even accidently pulling a dead tree on top of yourself are just some of the risks.

But with proper care and common sense, these risks can be avoided. Always wear eye protection, monitor who else is around before using tools or pulling large stems and always make sure that a tree is sturdy enough not to fall on you when you pull the lantana out of it. 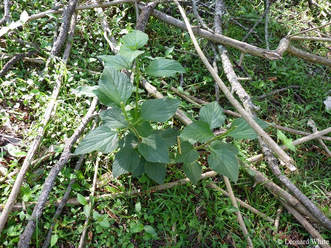 Lantana reshooting
​​Hopefully, if Steps 1 and 2 have been followed, Step 3 will be pretty easy. Follow-up generally involves walking over a cleared site to check for any reshooting roots, stems or seedlings.

It is generally best to do follow-up every two or so months after a site has been cleared. There should be less and less regrowth each time. When the amount of regrowth is negligible (think 10 new shoots per acre or less), the site will only need follow-up occasionally. At Bangalee, we have found that our newly cleared sites reach this maintenance point after about one year. From there, we do follow-up approximately every six months.
Sometimes there is more substantial regrowth. This is inevitable but is not a problem if managed quickly.

Perhaps the most common form or regrowth occurs when a single stem at the bottom of a large pile of dead lantana sets root and starts growing. If it looks easy to reach, we simply pull it out. If not, we bring in the backpack sprayer.

In very open areas, lantana frequently regrows alongside smaller weeds such as cobbler’s pegs, stinking roger and stinging nettles. When this happens, it is generally easier just to use the backpack sprayer to control all the weeds at once.

One final tip. When doing follow-up, don’t forget took look up the trees as well. It is truly amazing how often a single stem goes unnoticed simply because it is above eye level!