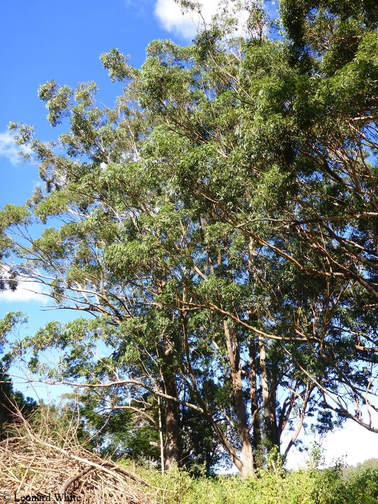 Full-size Sydney Blue Gums
​Sydney Blue Gums are the epitome of the eucalypt family. Sydney Blue Gums are a tall, straight tree with a wide, branching canopy. They grow to 50 metres tall in a variety of conditions but do prefer fertile soils with moderate amounts of moisture. At Bangalee, youngish blue gums can be seen growing around the edge of the picnic ground while more mature trees are located alongside the river track.

Blue gums get their name from their smooth, grey-blue bark. However, in older trees, the lower few metres can actually be covered in rough, brown bark with the smooth bark only starting near the first branch. Blue Gum leaves are long and thin and droop slightly from the branch. White flowers occur in late spring and summer emerging from the node where the leaf connects to the branch.

At Bangalee, we plant Blue Gums on the river flats. The rapid pace of growth provides a long-term canopy as well as long-term soil stability. Not only that, but Blue Gums host a range of native species and form a major part of the ecosystem in areas in which they are present.

The entire trunk and all the branches are covered in a rough, thick, grey bark. The leaves are a typical eucalypt shape albeit a little shorter. Large clusters of white gum flowers appear at the on the crown of the tree in late spring and summer.

Angophoras thrive along the river flats at Bangalee. As with Sydney Blue Gums, they are fast growing and provide an excellent long-term canopy. Another advantage is that they are slightly more drought tolerant as seedlings than many other species of eucalypt or bloodwood. 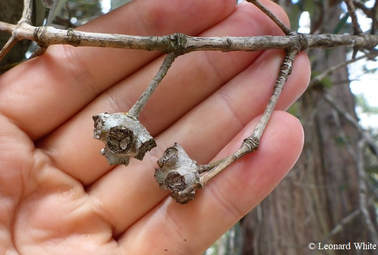 Turpentine seed pods
​Adult Turpentines grow to over 50 metres and can have a girth of over three metres. More often than not, the main tree will be surrounded by several smaller sucker trees creating a mini grove. Turpentine leaves are dark green on the top and grey-green underneath. They are far more oval shaped than a regular gum leaf and usually have a slightly sandpapery feel. The edge of mature leaves also curl downward.​