​Each type of native plant requires a slightly different process to successfully propagate. Some can be easily grown from seed while others can only be effectively grown from cutting.

​For most native plants, germination from seed is fairly easy. Simply collect the seeds, place them in a tray with some soil and keep them moist until they germinate. Once big enough, they can then be transplanted to individual pots.

However, some plants such as eucalypts, bloodwoods and turpentines are a little more fussy. In the natural bush, their seeds only germinate after a fire has been through. This means that successful germination at home requires replicating a bushfire. The best way to do that is to put some dried gum leaves in an old pot or frypan and set them alight. The ash can then be spread over the surface of the soil in the seed tray. Do not put the seeds in the fire because it is too hard to regulate the heat. Too much heat and the seeds die. Wait for the seed pods to dry out and open on their own. Once open, just sprinkle the tiny seeds on the ash and soil mix and keep the whole lot moist until the seeds germinate.

​Cuttings are even easier to grow than seeds. Find a tree with some new growth and clip off the new shoots with very sharp secateurs or scissors. Try to only get the soft, new growth as this is full of growth hormone and it far more likely to set root that older, woody stems. The cutting should be no more than 6cm long. Any more and it will not be able to absorb enough water to survive. If you are in the bush and won’t be able plant the cuttings for more than half an hour, place them in a container of water to keep them moist.

Once collected, strip the leaves off the bottom half of the cutting. Dip the stripped end into some water then into rooting powder. Next, just make a tiny hole in the planting tray with a twig, place the cutting in, and pat down the soil. The cuttings must be kept out of direct sunlight and watered daily for at least the first month.

Do not be alarmed if several of the cuttings die before they have set root. This is entirely normal. When a cutting has set root, new growth will appear. Depending on the species, this can happen as soon as one week or as long as six months.

Our experiments have shown that rooting powder is far more effective than rooting hormone gel. Not only do we have a better strike rate with powder, but we also find that the cutting has a much more vigorous root system when it has been grown with powder.

Types of Soil & Potting Up 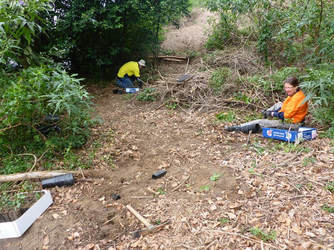 Potting seedlings that spouted on site
​Most seedlings and cutting do grow better in potting mix. However, potting mix is so much richer and better drained than natural soil that some plants do not survive the shock of being planted in their final location.

For that reason, we grow all our seeds, cuttings and potted plants in the same soil as they will eventually be planted in. The initial fertility rate is slightly higher but almost none die once they are eventually planted out.

When transplanting seedlings from a germination tray to a pot, be as careful as possible not to damage the roots. If two or more are simply too close to separate successfully, plant them in the one pot.

​Cuttings will need to be watered gently every day until they either start to grow or until at least one month has passed. It is very important not to let the cuttings’ soil dry out. Cuttings do not have roots so the only way they can absorb water is through the tiny cut stem.

Seeds and seedlings don’t need watering as often cuttings but do need to be kept reasonably moist. It’s a fine balance because overwatering will cause the seeds to rot whereas underwatering will result in seedlings dying before they have a chance to get established.