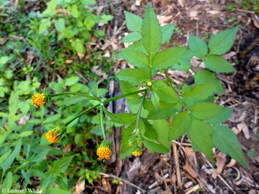 Cobbler's Peg in flower
​Cobbler’s Pegs are a continual problem at Bangalee because of the speed at which they take over a site recently cleared of lantana. In the right conditions, Cobbler’s Pegs will form a small forest up to two metres high and will completely obscure any native plants.

They do die off in winter but, if left to seed, will come back with equal vigour the following season. The pegged seeds make them even harder to control because animals and people alike can easily spread the seeds to areas previously free of Cobbler’s Pegs. 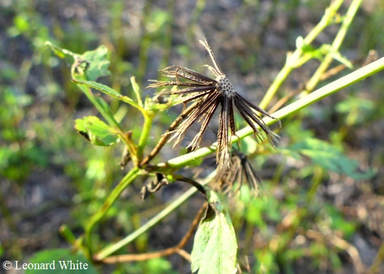 Remaining Cobbler's pegs after the rest attached to me!
Removal:
Cobbler’s Pegs take time to eliminate completely and the best approach to take depends on the level of infestation, amount of canopy cover and frequency of native seedlings. 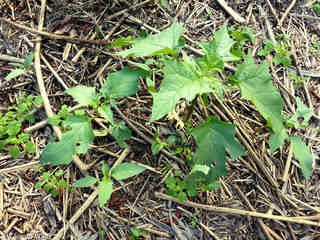 Datura seedlings
​Daturas are an annual weed that grow to around 1 metre tall. They most commonly grow in full sun positions on recently cleared land along the river flats. They can be identified by their blue-green, oak leaf shaped leaves and burgundy red stems.

Daturas flower in spring and summer, producing white to purple trumpet-shaped flowers near the top of the plant. By late summer, the seed pods start to appear. They are easily recognisable by their spiky round appearance. 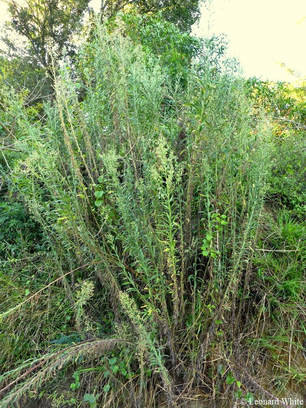 Tall Fleabane flowering
Flaxleaf Fleabane (Conyza bonariensis) and Tall Fleabane (Conyza sumatrensis) grow almost anywhere provided there is sufficient sunlight. They particularly like disturbed soil. This makes them a very common weed along the edges of roads and walking tracks as well as in areas recently cleared of lantana. Both types of Fleabane are early colonisers and, like Cobbler’s Pegs, will literally start to appear within weeks of soil being disturbed.

Both types of Fleabane have narrow leaves that grow to around 5cm long. The leaves and stems are greenish-grey in colour and both are slightly furry, particularly the stems. In both types of Fleabane, the stems are very straight and grow nearly vertically. The Tall Fleabane can reach 2m while the Flaxleaf Fleabane normally only reaches about 75cm.

Fleabane flowers in spring and summer with small, yellow, petalless flowers appearing on the tops of the weeds. The flowers eventually produce masses of fluffy seeds which are carried by the wind. 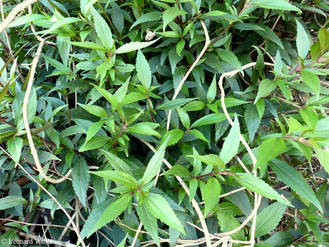 Mistflower
​Mistflower is not very common at Bangalee. Occasionally it can be found growing out of the bank of the Shoalhaven River but is neither widespread nor well established. It is a small, rangy bush that usually grows no more than 1m x 1m. It has blue-green-grey lanceolate leave that reach about 4cm long. The leaves are serrated along the sides with each serration only being about 1mm deep. The leaves are also opposite each other on the stem. The stems are green or brown coloured and thin but slightly woody.

Clusters of small, fluffy, white flowers grow in clusters all over the plant starting in early spring. The flowers do not have obvious petals but rather look like the centre of a daisy. 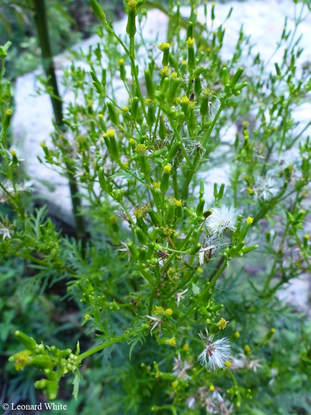 Stinking Roger flowers and seeds
​Stinking Roger gets its name from the extremely bitter smell it emits when damaged. It is a tall weed with a fine leave structure that most closely resembles a marigold. Unlike a marigold though, Stinking Roger grows straight upwards and can reach well over two metres. It grows in sunny positions in any recently disturbed soil. It flowers in mid to late summer with small, yellow flowers appearing at the very top.

The seeds are attached to fine, white thread similar to the seeds of Scotch Thistle. This means that they spread very easily by air. In order to prevent the spread of Stinking Roger, it must be prevented from flowering. This involves removing it or spraying it early in the growing season.